Over the eons that man has been on the earth, there always has been some craving for making sense of the wonderment that is the earth,  all it offers, and our own role on it.  There are so, so many interpretations of a Higher Power, by whatever name. My own sense of questioning came early but it probably developed more in the time I have been married to Graham, attending church with him.  In listening to the Christian interpretation of God, in participating in numerous book and study groups, I can see there is more in common than different. What fools we mortals be, fighting over the “right” way. 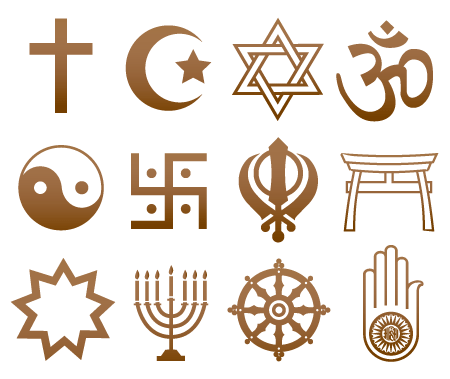 Visiting India brought me a closer view of several Eastern religions than ever before (and also learn not to react to the immediate gut reaction to the swastika.) Since Karma is a huge part of both Hindusim and Buddishm, I will try to give you a very very cursory explanation. I brought home books on Buddhism and Hinduism that were recommended by two of the guides and am learning a lot.  I’ll describe our visit to a Hindu Temple in another post and how I recognized some symbols in common with Christianity and Judaism.

Identified as one of the world’s oldest religions, Hinduism was developing in India about the same time as we estimate Abraham was knocking over the idols and developing the concept of monotheism that later developed into Judaism and off-shot Christianity and Islam.  So, it is similar in that it predates written records and the beliefs have only been codified thousands of years after development of an ethical system.

The main concept of Hindusim is that our beliefs determine our thoughts and attitudes about life, which in turn direct our actions. By our actions, we create our destiny.

It is reasonable to enjoy life and all it offers. There is clear evidence in the development of the Kama Sutra that Hindus have no sexual hangups, but recognize that sex is part of life. Arvind shared that in the early adult years it is encouraged to build a good life, providing well for your family.

This phase changes once the children are married and then it is time to prepare for the spiritual part of life. All the actions done up to this point and through the remainder of this lifetime will determine how the soul will be reborn in the next lifetime.

Hinduism is not the only religion that believes in rebirth of the soul.  Although some religions do not adhere to this simple outlook, most faiths ask us to believe that we are more than mortal flesh and blood. If you are religious, you believe profoundly that your soul connects you to God.  You also have some concept that the struggle of the soul, whether it is cast down and troubled or joyous and raised in triumph, is the life of spirit. And it seems to me that in Christianity, there is hope that if your life here has been troubled, that there is a spiritual reward awaiting you.

I’ve always casually considered karma to simply be payback, what goes around comes around. A person who does bad things will eventually have bad things happen to them.  In Hinduism karma is a Sanskrit word that means “deeds”.  Your deeds in this lifetime may not have a result in this lifetime, but it may accrue and not be until the next lifetime that your karma plays out. You may, if you are truly bad, come back as a lower lifeform, and have little chance of ever evolving into a higher lifeform in future lives. 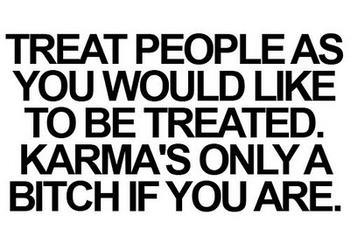 The purpose of life in Hinduism is to minimize bad karma in order to enjoy better fortune in this life and achieve a better rebirth in the next. The ultimate spiritual goal is to achieve release (moksha) from the cycle of samsara altogether. It may take hundreds or thousands of rebirths to get rid of all of one’s accumulated karma and achieve moksha. The person who has become liberated (attained moksha) creates no more new karma during the present lifetime and is not reborn after death.

There is no proof for karma and this cycle of rebirth. There is also no proof against it. Same can be said for any religious belief, even yours. We tend to go on faith, all of us. Be find….work on YOUR karma.

2 thoughts on “What’s Your Karma?”