Oregon has vote-by-mail which tends to increase voter participation in most elections above the national average, but there are still many Oregon residents who chose to disenfranchise themselves. In other words, they either care so little or are so annoyed and/or confused by the election process that they chose not to participate.

This is true everywhere I have ever lived. Many people turn out to vote in a Presidential election but, comparatively, most local matters elicit few interested people.

It’s kind of backwards, people. If you want your vote to really matter, the local elections are the place to be involved. In many, it may be a matter of a hundred votes or less that determines who wins or if a ballot measure passes. 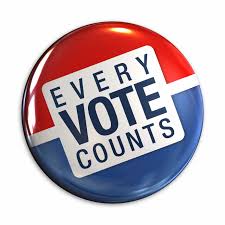 Last summer one of the local candidates to the Oregon house of representatives, Ken Moore, approached Graham and me while we were eating at the farmers’ market. He introduced himself and asked us to vote for him.  I asked him to explain his position on a few issues and his hope to help improve public education and his ideas on how to make school more pertinent to our kids sounded like a program I had seen in place in my alma mater in New Jersey in their new high school. I started helping on his campaign, making phone calls one evening a week. I wrote about the experience a few times including this blog.

During the winter I stopped one morning at a local coffee shop to pick up beans and heard a cheerful “Hello Beth!” There was Ken, so I joined him and the other people at the table. It was a few people from the Yamhill County Democratic Party and I was impressed that they were good people who really had good ethics. One of their goals is to get information out, to help the electorate be informed.

Yes, I got involved. I help with the Facebook page and I write periodic blah-blah about how it feels to be more knowledgeable about things that affect me, affect all of us.

This area of Oregon is pretty conservative and there are more registered Republicans than any other party.  And yet, many people vote the way they vote mainly because it is easy to just go the party line instead of being informed about the people who are the candidates and about the issues. Voting just along party lines has resulted in some pretty stressful situations where people feel their representatives are NOT listening to them.

In order to help people become more informed the leadership of the Yamhill Democratic Party has established a Neighborhood Leader Program. If a person agrees to serve, they are assigned 30 houses in their neighborhood where there is a registered Democrat. In this way, they can expect a cordial reception when they knock on the door and introduce themselves. Interaction is short but over the course of a year it is expected that the neighbors will begin to knwo each other and policy and positions can be discussed. Voting will be encouraged.

An active Neighborhood Leader, Ken Moore says:  Years ago I noted the progress as I drove by as a new owner restored an old farmhouse and barn and turned the overgrown fields back into productive farm ground. I never took the time to stop in so when his address was in my turf I finally did what I wanted to do for years. Well, his name is Donn Callaham and he is active in the ACLU and wants to get active in the YC Dems. It was great to see the star pop up next to his name when his ballot was logged in the last election. I think he will be coming to hear Brad Avakian speak at our July meeting.So this interaction resulted in a new neighbor becoming aware that there is a way for him to get involved and knowledgeable.

Susie Godsey also is a Neighborhood Leader and shared her experience. The best part of canvassing my Neighborhood Leader turf was discovering that we have a lot more Democrats in our area than I ever imagined. But the really fun part was hearing so many of them say, “Wow, I had no idea there are THAT many — woohoo, I’m not alone!”   I’m convinced that our Neighborhood Leader Program will not only expand and strengthen the YCD, but also will make the difference between electing qualified, forward-thinking Democrats and being stuck with narrow-minded, marginal officials who don’t represent ALL our citizens.

So, unless you really don’t care (and then no complaining allowed), if you want decent representation in government, get involved. Your voice will be magnified if you are active in your local area. But if you have no inclination or time to be involved, at least get informed.
Advertisement