If you are of an age, anywhere above 40, you most likely remember living through the summer without air conditioning. Growing up in New Jersey we had some warm spells but the reason we finally got a window unit when I was in high school was to help filter the air to help with my allergies.  It was the ONLY time my sisters wished they had allergies like me……

Each summer from the age of 3 until 16, I traveled with my parents on camping trips around the United States. We slept in a huge heavy canvas tent for years which eventually got replaced with two smaller lighter tents. In 1965 we got our first camper van that snugly slept all 5 of us plus our two boxers. Sometimes we enjoyed setting up wherever we wanted to stop, like crossing the Nevada dessert. Dad pulled off the highway (no interstate expressways in those days) and followed a dirt road a ways, making sure we stayed between the highway and the first rain culvert.  The idea of a camper van opened up new areas to us.

But we never went to the Deep South because, in the summer, the heat and humidity made things pretty uncomfortable. We visited some areas on trips during school vacations in December and the spring, but no full exploration without air conditioning.

I moved to Nashville in 1975 and my exploration of the Deep South really started.  My first car did not have air conditioning and I would jump in the condo complex pool after my late afternoon drive home. In the summer Memphis often was 90/90…90 degrees and 90% humidity. My hair in those days best resembled Bozo the Clown because of the damp. It was years before I finally got a style that was good for my curly hair and stopped fighting nature for that straight hair look that I never could achieve.

Until air conditioning spread throughout the South is was a laid back place. I lived there in the mid to late 70s and returned to Nashville in 1994. The difference was amazing. During those two decades, air conditioning had given the once sleepy culture a vitality it had not had – ever. There is a reason the South had a reputation for being slow….it was. You HAVE to move slower in the kind of weather that lasts for months and months.

Once air conditioning became widespread there was a new migration of people in the US. Many people moved south to areas that welcomed them and cities grew. Nashville had a population of 500,000 when I lived there in the late 70s and over a million 20 years later. And that population was much more diverse with people from all over the globe, not just the nation.  This influx of diversity resulted in some new cultural norms in the South,

For example, when I worked for the Tennessee Supreme Court in 1975-1978, a pretty conservative work place, I stood out as a “foreigner” because of my Yankee accent.  (In those days they called me a “Yamn Dankee” and smiled, thinking they were not being rude, bless their hearts.)  I used to fly home to visit my parents and bring back bagels. One day one of my co-workers asked me why I was eating my sandwich on a donut.  I introduced them to bagels and soon I was “importing” 5 dozen each time I flew back from New Jersey to Nashville. In 1994, when we returned to Nashville, it became very apparent things had changed…at least on the surface.  I saw  bagel shops all around town. More surprisingly, I saw many many many multi-racial couples. However,  people were no longer as “polite” as they had been before. They expressed very clearly the things that had changed that they hated. Very few thought the change was good, but they sure did like their air conditioning. 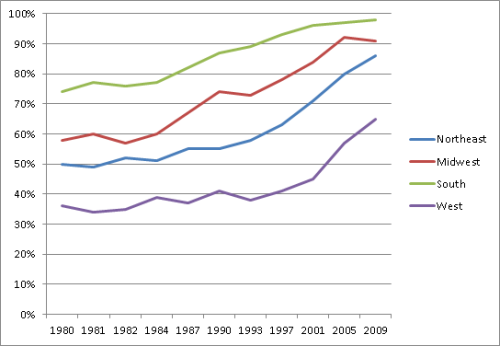 As this climate change happens and various areas of the country experienced a hotter than typical summer through it all most of us have our air conditioning.  Can you imagine life without it?  Would you live where you do without air conditioning to keep you comfortable in the hot summer weather?  We are pretty spoiled.

2 thoughts on “Changes in our Lifetime: Air Conditioning”