MOM-izm. (noun) A statement presented as a grand truth by your mother, so it must be considered to be reliable and accurate.

I don’t know about you, but I wised up to some of my mother’s momisms pretty early. They just had an otherworldly basis, as if there was no place for them in the reality of the world I lived in. So, it became a bit of a test for me to see if I could knock them down.

A GIRL SHOULD NOT GET MARRIED WHILE SHE IS IN COLLEGE AS SHE WILL NOT FINISH!  My mom worked at a nurse at the local university’s student health center and met a number of young women. Some she “adopted” and I soon had a number of “sisters”. That was cool…the more to love the merrier. But R met A and he was in the Navy heading to JAG school and then to assignment somewhere. Mom was sure R would not graduate, especially when she got pregnant, but sure enough, she walked with her class and then went on to do great things Mom admired. Amazing what you can do when you have a plan.   Later, I got married before I graduated, and finished my bachelor’s degree on time, no problem. In fact, the new location lead to an interesting job opportunity I would never have had if I had not moved.

DIVORCE IS FORBIDDEN! I knew my Aunt E was divorced; THAT was not a secret. The reason was, though.  E and her daughter S lived with my paternal grandparents and other than their rooms being very crowded and messy, nothing was unusual, really. But when my own marriage became emotional stressed I had this wall of forbidden territory I kept bumping against. No  method of trying to reach his head or his heart worked and it wasn’t until my mother came to visit and noticed how rude he was, even to her, she said to me “I don’t know how you can stay with him.”  It was like a ray of sunshine on a dark dreary day. Thanks for changing the Momism, Mom.

NO SEX BEFORE MARRIAGE! Get real Mom. Teach responsibility. (Don’t just leave books out for me to “find” and read.) Teach about not giving yourself away. Teach about birth control. Teach about how magical sex can be if the partner is a person who truly loves you. But also remember to teach that sexual urges are pretty darn normal.  So, yes, I had my early escapade, and shamefully but wisely went to the health center to get my birth control. Hid it in the sweater drawer when I went home for the summer. (Surely there was no need for Mom to go into THAT drawer.) What fools we be, we who try to deceive. Yes, Mom, the pills were mine.  I was being playful, but responsible. And get out of my drawers!!!

THE MAN IS THE BOSS. YOU WILL TAKE CARE OF YOUR HUSBAND AND HE WILL TAKE CARE OF YOU. Only problem with that one was he didn’t have the same mom so he didn’t get taught the same lesson. (Of course, if he had had the same mom, we would have been into a different forbidden territory-LOL) A corollary of this was told to my oldest sister who, when she achieved her Masters in Nursing and discussed continuing to get her PhD was told she would emasculate her husband who had been “working” on his PhD for 10 years. My sister did not recognize this was a Momism; she thought it was sage advice, and so, she did not continue her education.  That marriage ended in divorce, because, as I indicated above, I broke the taboo in the family.

ADULT CHILDREN SHOULD LIVE NEAR THEIR PARENTS, TO BETTER HELP THEM WHEN THEY GET OLD. I was very very young when my paternal grandmother came to stay with us to recuperate from a heart attack. I do remember that she decided that I, at age 3, was too old for my favorite bedtime blankie and made it disappear.  I imagine my mom had issues as well because Grandma did not come back when she had a subsequent heart attack a few years later. Mom had my vote on that one, not that she asked.  When I ended up living 1000 miles away from my parents as a young adult, my mom asked why. I reminded her that she had taken us camping around the US every summer; that if she wanted me to be convinced that New Jersey was the center of the universe she should have never shown me the world. 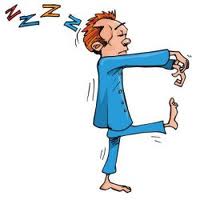 CHILDREN NEED TO…….(PICK ANY) WAKE UP AND PERFORM WHEN RELATIVES STOP BY AFTER BEDTIME, GET ON THE PHONE AND TALK TO YOUR GRANDPARENTS EVEN THOUGH YOU VISITED THEM WEEKLY, GIVE KISSES TO PEOPLE YOU DIDN’T KNOW BECAUSE YOUR PARENTS SAID IT WAS WHAT YOU MUST DO…(the list goes on and on and on). One morning my mother told me that I had played my violin very well for the second cousins who had stopped by (we were just off the New Jersey Turnpike so it was a friendly pit stop) on their way home to Albany around 10pm. I was 10 years old and I’m sure it was no more than Twinkle Twinkle Little Star, but golly gee, I had no memory of it. What a talent! I could play in my sleep! This “late night” performing did not bother me as much as the enforced phone conversations and I never made my kids get on the phone. Interesting enough, they often wanted to. Amazing what free choice can do.

OUR RELIGION IS THE ONLY RIGHT ONE. Well, no. Simply, no. Since people started sharing their thoughts about their place in the Universe there has been over 3000 interpretations of man’s relationship with God. And all, every single one of them, was “manmade”.  (very few women have been involved in the major Western religions.) So, let’s toss out “my way is the only way” and get to the basics-teaching morals and behavior based on treating others the way you want to be treated. I dare say if we comply with that, as simple as it is, we will be happier as a people.

IF YOU’RE DOING SOMETHING I WOULD NOT LIKE, YOU SHOULDN’T BE DOING IT.  Yikes, Mom…not fair! Although you smoked, it wasn’t pot. You didn’t cut school.  You didn’t hitchhike. (Well, considering how scary that one was, I never did it again.) You didn’t get mugged in the New York subway with your best friend. (And I couldn’t tell you about it because it was one of those days when I had skipped school.)  My mom’s voice was in my head when I started a misadventure but I always told her to be quiet, I had thought it through. So, when it came time to raise my own kids, I modified it. IF YOU’RE DOING SOMETHING YOU KNOW I WOULD NOT LIKE, BE SURE YOU WANT TO BE DOING IT.

It would be interesting to read my kids’ version of this essay. LOL