I believe we need police. There are people whose ethics are so debased that they do what they do whenever they want to do it and so, take advantage of people, destroy property, assault people and more. We need police to help protect us from them. To identify them and to hold them apart from society in order to protect society.

In the past year the police themselves have been targeted because of anger over unequal treatment by police of minorities. However, it is right and proper to condemn the attackers and support the people in blue who serve us. To mourn their killings and support their families in their loss.

But….sometimes, it becomes clear that law enforcement is serving private interests, not the law.  We saw it during the Civil Rights movement in the 1960s and now, we are seeing it again against the Indigenous People who are protecting the Missouri River.  Because the pipeline is being constructed by a corporation with profit forever as the primary motive, those people care more about their pockets than their future ability to obtain clean water, we are seeing the subversion of police to serve private needs over the public good.

Many of you know about the stand-off at the Dakota Access Pipeline. Many of you do not because it generally is not covered by the major media. Here is a New York Times article from the end of August which will present the issues at that time.

The protesters initially were from the Standing Rock Sioux Reservation, located just south of the planned Missouri River crossing. They are protesting not only the destruction of some ancient heritage sites, but the very real possibility of an oil leak polluting the water so many people depend on for drinking.  Now, called Protectors, the people there include not only Indigenous People from all around the country but many allies of all races, cultures and religions that arrived even with cold weather to stand with them against the wrongness of police standing to protect private interests.

Facing them we have police from law enforcement agencies that are not only local but from across the country, suited up in riot gear.  They have used water cannons (similar to what was used to knock down peaceful protesters in the 1960s) in sub-freezing temperatures, causing many people to require hospitalization because of hypothermia.

They have used rubber bullets to shoot at people, causing injuries. The most heinous occurred two days ago when a young woman was hit in the arm which may need to be amputated.

The way this protest is being handled is in stark contrast to that of the Bundy group who invaded and took over a federally owned wildlife refuge. Not only did law enforcement officials give them a lot of room to move on and off the property, but it ended shortly after the police shot and killed one of the protesters.  The trial exonerated all the protesters, leaving us Oregonians scratching our heads, wondering why we tax payers need to cover all the damage they caused to the site itself.

The law enforcement presence in North Dakota is not being as strongly aggressive as they could be, thank goodness. If the bullets become standard and people start dying I believe this protest will not end. It will become even larger. 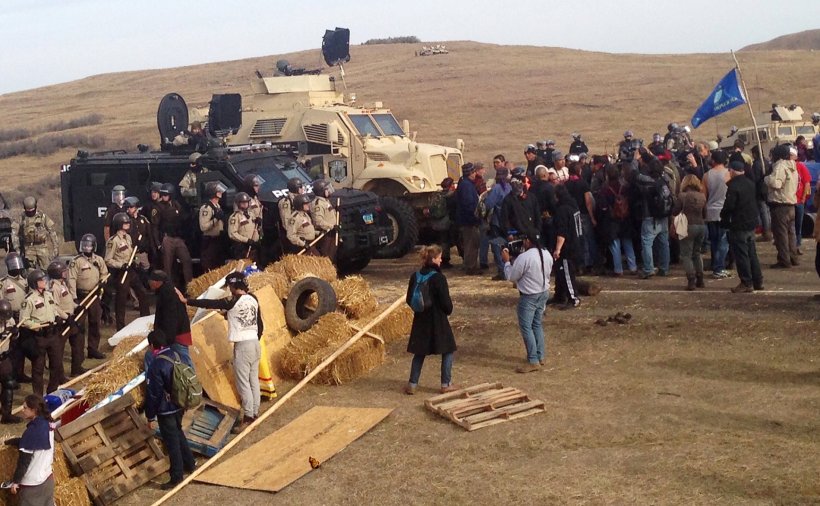 A line of police move towards a roadblock and encampment of Native American and environmental protesters near an oil pipeline construction site, near the town of Cannon Ball, North Dakota, U.S. October 27, 2016. REUTERS/Rob Wilson

Now we hear that the Corps of Engineers will require the camp to be moved to a location south of the river to “protect” civilians from being hurt. Is that a veiled threat to say “you stay, you will pay”.  They were told they must vacate by December 5th.

My son-in-law is on his way there now. He has learned there are over 15,000 people with the Protectors. This is not some small protest. This is water versus gold.