I start my mornings, when I have time, with a cup of coffee and the Internet. First, emails. Then, Facebook. I’m sitting here today in embroidered blue jeans and my tie dyed tee with fringes on its sleeves….about as “hippie” as my attire can get, I guess.  I select something from Pandora and find my attention caught by this music.  It got me thinking.

Thinking about the way our nation, our communities were in the late 1960s and early 1970s. We were as split and splintered as perhaps no other time since the Civil War. It was a time, like now, when a person’s political stance fractured families and friendships.  Even in myself, understanding the sense of patriotic pride that pushed some guys I knew to enlist and go off to what was most assuredly a blood bath, I had trouble balancing that sense of pride with the horror of what the war was doing to the people in VietNam and more importantly, the people who came back damaged by their experience.  We were cruel to our veterans who returned and many remain burnt out to this day. Others were proud of their service and resumed life. Still others were angry at the anger and so the split continued.

There has always been a crowd chanting 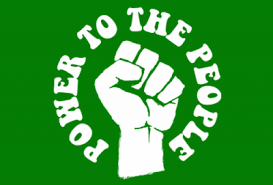 We talked about a generation gap but no one really worked on healing the other divide. And so we who were teenagers when college students who were peacefully protesting were murdered have now become senior citizens. And the divide seems to be greater than ever.

When I heard the Crosby, Stills, Nash and Young song Ohio playing on Pandora it made me pause and I then had a very disturbing thought…and that is why I turned here to try to find a pathway through it.

Today, if we had a similar shooting by a government ordered militia of four kids on a college campus who were peacefully demonstrating would it stop the atrocity that they were protesting?

And I don’t think the answer would be yes today. Not any longer.

When a man gets dragged out of his reserved and purchased airline seat and people start posting things that are not perfect about his life as a way to discredit HIM, someone has lost their values.

When grieving parents of a fallen soldier offer the Presidential candidate a copy of the Constitution and then they are attacked for not being perfect, someone has lost their values.

When Congressional Representatives refuse to meet with their Constituents during a recess when time to schedule town halls is normal, someone has lost their values.

When there is growing evidence that our President is focused on personal gain and benefits for his peers in the uber wealthy, and his supporters criticize the messengers, someone has lost their values.

When friends stop talking to long term friends because there are differences of opinion, someone has lost their values.

My mom called the Baby Boomers the “me” generation. From her view she saw a lot of young people who wanted to break with conventional behavior and do “their own thing.” She felt this kind of individualism would move us into a broken community and while there are many benefits for people pursuing their pathway even when unconventional, there is a truism that if the focus is ONLY on the individual, the community loses.

As I drove south last week to go to the Shakespeare Festival held in Ashland, Oregon, I passed through the beautiful green fields of the Willamette Valley. One town, Junction City is a conservative stronghold in this very mixed region. At the southern edge of town in front of  a tire dealership, the owner often posts political statements. This one caught my eye and I laughed. “Snowflakes ahead” referring to the city of Eugene, a very strong liberal community.

Being called a snowflake is a trendy insult used by conservatives generally against anyone who thinks individuals have rights.  They say we are responding this way because our feelings are hurt and so they belittle us.  They don’t understand that it is not our own personal feelings that are hurt but an empathetic response for members in our community who have been hurt.  To me it implies short-term issues and perhaps a lack of intelligence. I tend to feel irritated when someone refers to me as a snowflake because I have been this way for …hmmmmm at least 5 decades that I can claim to my own thinking and reasoning.

The problem, though, is not what my cohort is called, but the fact that people prefer to demean and detract instead of trying to understand.

It gets down to core values.

If you feel people who suggest you read something and think about it makes you feel dumb, you have a self esteem problem.

If you feel people who expect women/Blacks/Latinos/LGBTQ/handicapped to have equal access and equal opportunity are causing you pain, you have a vision problem.

If you feel that there is only one way that is right, you have a navigator problem.

If you feel that people who are not wealthy are better than everyone else who then is worthless and there for you to use, you have a humanity problem.

If you feel that the homeless have done something bad and deserve their hard times, you have a cardiac illness.

As a society, as a community, we are sick and most of all, it is our heart that needs to repair.

All I know is that if something horrendous like Kent State happens today, I wonder if will we react as a unified community, realizing we ALL must move off our spots to work together?

The longer answer is……perhaps we can. If we don’t lose our way even more first.

What do you think? Your comments show you are thinking…a very good sign.

One thought on “Our Heart is Sick”