This morning my Facebook feed is full of “He Is Risen!” I understand the ritual and passion for this Easter Sunday, but once again, I have a perspective as a Jew attending church with my husband for ten years that may never occur to most of you.

All this declaration of Christ as your Savior appears to be meaningless gibberish for most people. Something they say by rote, without thought. Like my ex-husband who wanted to eat the foods on Jewish holidays but he had no understanding of the symbolism of those foods, many people I know who profess to be Christian are walking a pathway that is full of trimmings but no substance.

I spoke of this at Christmas also. The adoration of Baby Jesus and all the promise He represented goes no further than grabbing presents from under the tree for most people.

I am NOT espousing that someone needs to be strict in their daily observation of religion…ANY religion….in order to be a good person. In fact, with ISIS attacking Muslims who do not believe as they do, with fundamentalist Christians destroying rights and freedoms in this nation, with any ultra-conservative branch of any religion, we see they have very narrow definitions of what is right. That is NOT what Christ taught.

I confuse a lot of people when I say that I am closer to Christ than they are because I practice the same religion that Jesus did.  He observed the rules better than I do but he also broke them from time to time. Most of the time, he broke social conventions and was a dissenter, attracting followers and scaring the establishment. But generally, overall, his message was one of “love one another”. Treat people the way you want to be treated. 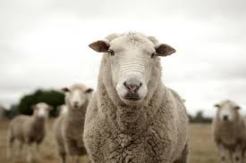 The Bible Belt where I lived for over 17 years has a preponderance of Christians who believe that Christ died for their sins, that they are saved. It may be a coincidence that that section of the country overwhelmingly voted for Trump, not necessarily because they liked him, because many did not like things about him. They voted for him because he promised delivery from things they perceive as evil. I believe their training as an obedient flock for their churches lead them to have faith without using any common sense about the promises made.  But their minds, like all good sheep, are befuddled by those promises.  They have not learned the ways to solve problems. They are stuck in a rut of tradition that means there is only one right way. And that includes following the shepherd.

Why am I picking on Christians? I just came from an Easter service where the Praise Band was singing and moving. The congregation, for the most extent, clapped as requested but there was no joy, no smiles. Did the words they learned as children not reach their adult ability to analyze? Are the praises they sing empty words without their hearts.  (In order for you to understand that I feel the same way about Jewish services where everything is in Hebrew, I will let you know that my Haggadah this past Monday’s Seder had limited Hebrew. I wanted the participants at my table to understand the story and the reasoning behind the holiday. To chant in Hebrew when you memorized it as a child and have no idea what the meaning is….has NO meaning.)

When does the message hit the heart? When does it become part of the soul?  When it does, you will rise.

Walking in the spirit is a pathway by people of any or no practiced religion. It means, simply, loving your neighbor as yourself. The rest is commentary.

2 thoughts on “We ALL Must Rise”