The title comes from an old Alka-Seltzer ad but could be applied to Sri Lankan cuisine. Since I returned from Sri Lanka I’ve been asked to write about the food, not only because I am a foodie but also because I posted a lot of pictures during the trip of what I was eating each day.

Sri Lanka cuisine is similar to Indian cuisine in that curries, dahl and rice dishes are common.  Someone told me that that Sri Lankans claim to have invented curry but that the Indians take issue with that.  I am not going to try to discover who invented it, I just enjoy them.  As an aside, “curry” means sauce so there are thousands of curry recipes found in a number of Southeast Asian countries.

Chicken curry (bowl of red in the center) with traditional accompaniments” ( counter-clockwise from right: rice, dahl, some potato based dish I don’t remember the name, naan, chutney, and pickled onions)

When you go to a typical Indian restaurant in America, you are often asked “mild, medium, hot or Indian hot”.  To that I could add Sri Lankan hot!  Actually it is not quite that bad if you stay away from the chili paste that often is an accompaniment to dishes.  The menus at some restaurants did include notice that some dishes were “very spicy”, “medium spicy” or “mild” as a guide for us westerners.

There are some dishes that seem to be uniquely Sri Lankan, two of which were often served on the breakfast buffet at my hotel.  The breakfast buffet included what we might call a “traditional English breakfast”: sausages, scrambled eggs, potatoes, grilled tomatoes, and grilled mushrooms.  It also included a curry, milk rice and egg hoppers.  The last two were new to me.  Milk rice (or rice and milk) I had growing up was a way of using up leftover rice served with milk and sugar.  In Sri Lanka, it is a firm, slightly salty dish, which reminded me of very firm grits or polenta.  The egg hopper is a very thin crepe like bowl made of rice flour batter with an egg cooked sunny side up in the bottom.  A special pan with steeply sloping sides is heated over a burner, the batter added and swirled around to coat the sides.  When it is set, an egg is dropped in the middle and cooking completed.  These were being made fresh at a cook station so I watched the process.  They had a spicy grilled onion mixture or chili sauce as accompaniment.

Breakfast also included an assortment of baked goods, fresh fruit and juice.  The waiter convinced me to forego the orange juice I usually ordered to be “Sri Lankan” and get the fresh pineapple or mango juice.  It was delicious.

During the week, my lunch was provided by the lab from a local takeout around the corner.  It was referred to as a “packet”, for the flat box it came in.  It was usually rice with some protein and vegetables and a thin egg omelet.  Noodles were the alternative starch component.  The servings were large, almost large enough for 2 and cost under $3.  Fruit yogurt, ice cream or fresh fruit for dessert.

Prawn curry with noodles, vegetables, tofu, and egg omelet. The dark red dab in the upper right corner is chili paste which I was told by my Sri Lankan liaison to avoid as it was too hot for him! I took his advice seriously. Prawns are what we would call shrimp here.

As Sri Lanka is an island, seafood is frequently included on menus.  My first day, I had cuttlefish with rice for lunch.  Cuttlefish is a relative of squid and octopus and tastes similar but definitely chewier.

One day, Lucky (my liaison) suggested I try something different and he ordered Chicken Lamprasi which is grilled chicken, rice, a hard-boiled egg and a “cutlet” wrapped in a banana leaf and steamed.  Unlike our ‘cutlet’ over here, it was a thickly breaded chopped meat filled item that reminded me of a tamale but seasoned differently.

As an aside, Sri Lankans generally eat with their fingers (right hand only!) but provided me with a fork.

Although I ate most of my dinners at the hotel because the construction on the main street made walking somewhat treacherous,  I did venture a couple of blocks down the street to Raja Bojun.  It had been recommended as having a buffet featuring dishes from all the regions of Sri Lanka.  I really needed a guide and an extra stomach to work my way through all the choices.

One half of the buffet (21 choices) were Sri Lankan dishes.  In addition, there was a station where chicken thighs were being grilled and another  making egg hoppers.

About one third of the choices for desserts including fresh fruit, cheese, cakes, puddings, ice cream and yogurts.

The restaurant at the hotel featured mostly western dishes with some Sri Lankan touches.  A Sri Lankan fish soup and grilled watermelon and prawns salad were two interesting offerings.

Three desserts at the hotel were particularly notable:

“trio of Kirulaga and coconut surprise, steamed coconut cake and upcountry nut roll” and “banana fritters with vanilla cinnamon ice cream and honey”.  I think I have spelled everything correctly as I am trying to read a bad photograph of the menu.

Wine and most distilled spirits are imported and relatively expensive.  However, a glass of Australian wine at the hotel cost about $7 which is in line with hotel prices for wine by the glass here.  I tried three different local beers and Lion Lager won out.  Good flavor and body; the others tasted like Coors Light.  Beers can be ordered in 1 liter bottles – one will do.  Lion also helped counteract the heat of the curries!

I did eat the first Friday night at the Bavarian restaurant across the street from the hotel sitting at the bar (no tables of one on Friday nights) when someone ordered the monster pictured below (not me!).  It holds 3 liters and was to be delivered to a table of 3 according to the bartender.

There is one local distilled spirit, Arrack, which is distilled from coconut flower sap, sugar cane and/or red rice.  It is aged in barrels and tastes like a cross between dark rum and bourbon.  I had it over ice, but was told that most Sri Lankans prefer it with soda and no ice (something they must have acquired from the British).  I was told there was a local rum and gin, but did not try those. 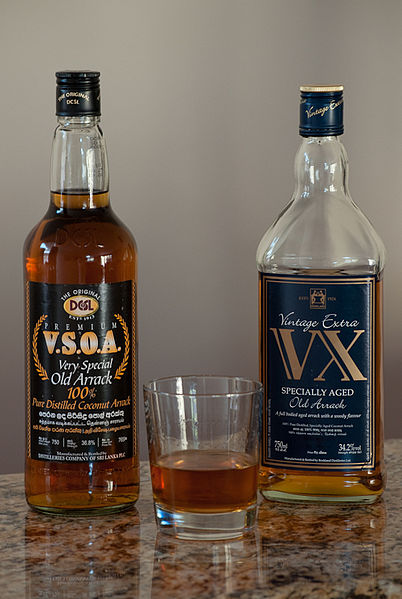 The full moon occurred Sunday, March 16th.  Each full moon Buddhists in Sri Lanka celebrates the Pula festival.  No alcohol is sold on this day; bars and liquor stores are closed.  The Bavarian was closed as most of its business was due to the bar and less from the food.  At the hotel, one could order alcohol ONLY through room service and there was a minibar in each room.  I abstained and drank only bottled water with dinner.  I had fish curry and wished for my Lion to cut the heat!

One final note,  I never had any GI problems.  I had taken Hepatitis A and B, typhoid and tetanus shots before leaving as recommended by the CDC travel website.  I generally drank bottled water rather than tap water. The hotel and lab provided bottled water in abundance. There was an article in the local newspaper that the tap water in Colombo was declared safe.  As for fresh fruits I ate only peeled fruit outside of the hotel as recommended by the USAID instructions sent to me prior to my trip.