I’ve never been a light hearted soul…..things just are not right so much of the time that it concerns me.

That’s not to say  I’m not a happy person or enjoy a good laugh. I AM a  happy person who is pretty positive but I don’t laugh easily. Most of the time, it seems that other people think is funny just don’t hit me the same way.

Recently, in an effort to still try to talk to people who have viewpoints on the conservative end of the spectrum I have begun to respond to comments they make, particularly if the reaction of their other friends is laughter and the issue is not funny to me.  If the meme or comment is a putdown, so the joke is at someone’s expense, I am the stick in the mud who points out that it is not funny. That perhaps they forgot to pull on their Christian compassion before making fun of someone.  ( I only say that because they post a lot of Bible quotes and also how important it is that Jesus is in their lives.) 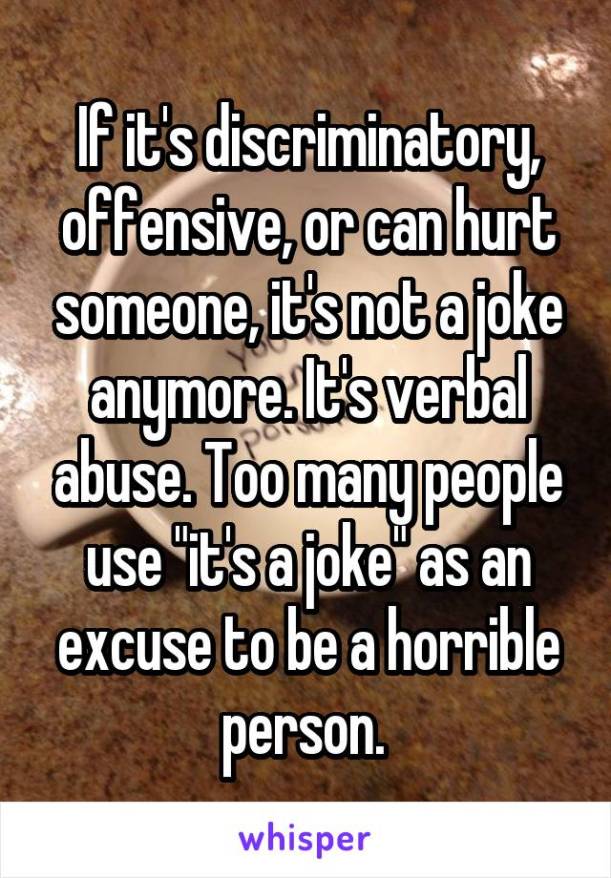 Generally, my comments are not appreciated. No surprise there. Someone who uses humor at other people’s expense generally is not comfortable being told, even when calmly and with quiet language, that their choice of words is not healthy.  I suppose it is only a matter of time until I am unfriended. Not a biggie, but it will be sad because the more we stop talking to each other, the sooner we will forget we have more commonalities than differences.

Being told to “lighten up, it’s only a joke” is something I’ve lived with. My last blog I told you about my first husband. This time, the story is about my second husband.

Before I go further I want to say this marriage produced two beautiful children who are now healthy adults, participating in society and enjoying life. Despite all the angst that resulted in that marriage I would never say or feel it never should have happened. I am blessed to have those children.

The differences between that man and me, our views on what life can be and our ways of aiming for our goals were very clear. Still, I can appreciate a few things he gave me that were gifts of insight I never would have made because I just did not think the same way.

For example, when my dad had been living with Parkinson’s disease for 10 years and no one would talk about it, he called us out on it.

For example, I had been fighting my naturally curly hair all my life trying to make it straight and he suggested I get it cut well so it would be acceptable to me.

For example, when he asked me if I liked to dance and when I said yes, pulled over to the curb and pulled me out to dance to the radio on the grass.

But those were few and far between. Life with him was usually off kilter at best and downright fearful of what I might find when I came home when things were at the worst.

See, he is mentally ill. His diagnosis has changed over time but he never worked to “get better” because he argued the therapists wanted him to change. Well, duh. What you’re doing is not working. Maybe a change would be a good idea?

And his favorite expression, after he would denigrate me was “I’m only joking.” Sorry, forgot to laugh. In fact, instead of not laughing I had to work hard to stay calm because of his fragile mental state.

It was clear that he thought only of himself and how the world revolved around him.  He is unchanged to this day.

Now, I do not know this Facebook friend well enough to know if she also has some issues so making jokes like that helps her cope. No idea. But I won’t stay silent.  I will not be, nor will I permit someone to be,  the butt of a joke.

I read something else today on Facebook, also from a person who I don’t really know.  But I do know one of her adult children and that gives me a lot of insight about her. She noted that in times of recent crises we saw people ignore any political, religious, or racial differences and just pull together to help each other. She suggested we live this way.

Think about how much better we would be if Congress, for example, sat down and said “yes, too many innocents are being killed. Let’s talk together to see if something we who have the power can do to make this country safer.”

How much better we all would be if instead of saying it is their own fault, that we pitch in to work with the homeless to provide safe housing and health care for what ails them.

How much better we all would be if we all could have a living wage with a 40-hour job.  Then we could afford housing, put food on the table and not have to run from our issues into drugs or booze.

How much better we all would be if we all could teach how to learn instead of how to pass a test. If we could all understand that not everyone is going to make an A and perhaps there are other skills the ones who have trouble in school could handle well.

How much better we all could be if we decided on what we wanted to be when we grew up and didn’t have to pay for the education to attain that the rest of our lives.

How much better we all could be if we stopped putting other people down. If we chose to recognize when someone makes us uncomfortable it is a learning opportunity, not a joke. And continue the discussion.