It was a good day to explore. I dropped Graham at a professional conference in Vancouver, Washington, a suburb of Portland just north of the Columbia River. Instead of returning the tried and true way down I-5 and then Oregon Route 99 to McMinnville, I perused the map and went astray.

The next river crossing to the west required me to drive about 30 more miles on I-5. Then on U.S. 30 that follows the Columbia to the coast,

but I then headed south on Oregon Route 47. It wiggled and waggled through part of the Coastal Range, complete with “Snow Area” signs. I thought how my back road driving to farms throughout West Virginia and in Ohio and Kentucky helped me become comfortable with curving mountain roads.

The mountains were covered in evergreens and then I came across a clear cut which made me sad until I recognized that all the trees were young.

Out of the hills I started seeing more farmland, and the further south I drove I noticed more and more land was planted in grapes. There is more to explore…so much more to explore.

Having grown up in the Northeast, the only time I lived in a climate that was significantly different was half a year in Pueblo, Colorado. I am used to a climate that has cold winters, hot summers and about 40 inches of rain a year, pretty evenly spaced throughout all four seasons.

I’m now in the Willamette Valley in Oregon which has a similar climate except the rain tends to take place mostly in the winter.

Driving west across the United States this past week has reminded me how much of the central part of the nation has a lot less rain. The trees disappeared in eastern Kansas, reappeared along the eastern part of the Rockies west of Denver, and then faded away again. Eastern Oregon right is high desert and there are no large tracts of trees here now. I did learn that junipers were harvested…and then found not to be a commercial wood. But the trees which had taken hundreds of years to grow were gone, and there are no new trees now.

Sure, planted trees grow. I’m not talking about the classic windbreaks planted around homesteads on the prairie. I’m talking about natural forests.  They are an indication of ground water. In much of the central portion of the country, the only places you see natural tall vegetation (besides the timothy grass) is along water courses. 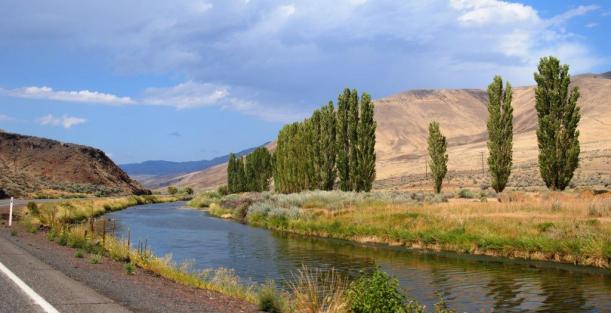 But there is farming everywhere. Amazing to see patches of green in the middle of the high desert where the natural vegetation is sagebrush and tumbleweed.  What makes that possible is irrigation.

Canals to bring water to fields started showing up west of the Rockies. When we got off the Interstate highway in Oregon and started driving back roads the canal systems were easier to see.

It surprises me that so much spray irrigation and open canal irrigation is in use instead of drip irrigation. I suspect there is a lot I don’t know, but loss to evaporation has to result in water loss that is open to the air.