Each year, the second Halloween is over, we get bombarded for 6 weeks with the need to be big consumers. The commercials on tv explode, teasing us into believing we just NEED that thing we never thought about five minutes before. The printed ads in the local newspaper or mailed to us via bulk rate paper our house  with colorful pleas to spend spend spend.

If you believe them, Christmas is just not complete without the latest gadgets including technology for toddlers, more boots and clothes for the ladies, more tools for the guys, more makeup and perfume, more ties, more more more.

This year, do it different…..and do it better.

First of all, know your budget and stick to it.

Secondly, make a list of the people you want to purchase for.  Think about their interests, their hobbies, the things that make them happy. Start listening to them NOW if you haven’t been paying attention all year.  And be wise….the latest in fashion accessory for your fashionista may be out of style in a few weeks. Aim for classic to provide long term value.

Third, aim for the best quality you can afford. Better to buy ONE gift and one small stocking stuffer than a large volume of junk.  Let’s start teaching about the value of gift-giving as the living symbol of the three wise men.

Finally, buy local. Yes, I know,  it is less expensive to hit the major big box stores. But this year, let’s think about the effect of where we spend our dollars.  Big box stores are national chains with corporate headquarters unlikely to be in your town. So the only employment benefits are probably low paying, possibly minimum wage and maybe also part-time to avoid paying benefits to full time employees.  Many big box stores have corporate deliveries of items from a regional warehouse that does not typically make purchases in your town, so basically for each dollar you spend in that store, only 5-15 cents stays in the local economy.

Meanwhile, down on Main Street and in small neighborhood shops you have stores owned by your neighbors. They’ve been there maybe for decades, but probably not.  Our shopping choices killed many downtown stores as we shoppers opted to head to the mall instead.  Many shops are small with eager entrepreneurs who lost their jobs in the recession and are trying to find a way to make a living. The dollar spent there basically gets spent almost in full in your community.

In addition, there are numerous holiday markets and bazaars at this time of year. If you are lucky, you have one in your area that features artist, artisans and craftspeople who produce all the items they sell by hand. Their skill, their talent provides you an unique gift of high value, one of a kind, for that special person on your gift list.  The prices at these markets range from $1 to over $500. I know, I run a holiday market and I see eager craftspeople work hard all year to produce their love in a tangible way. My job is to tease the shoppers to at least come take a look.

Unique might scare you. If you want to be just like everyone else, unique is not for you. But if you are your own person, walk your own walkway, want to stand out from the crowd, this is the place for you.

There’s a lot of cross-cultural activity in our home; we celebrate it all. God is God….the way you celebrate him is man-made, whether you attend a millennium-old religious practice or dance each full moon in the meadow.

My mom was particularly concerned when I told her I was going to be marrying Graham that I would be “lost” to the Jewish people. What has happened has been remarkable and I think she might even have appreciated it all.

It started when the Episcopal priest in Pueblo, Colorado suggested we add a few Jewish symbols into the ceremony blessing our marriage. We made a chuppah of one of my mom’s lace tablecloths and Graham stomped on a glass. The priest explained it all the the crowd and one choir member thanked me after for inviting her because she “had never been to a Jewish wedding before.” After I told her she still had not been to one, Graham and I decided to hold a Passover Seder a few weeks later.

When I was young I had protested the Haggadah we used to my mom twice. Once, after my grandfather died. He had run the Seder in Hebrew for six hours and I have to say as a kid I never got much out of it except for timing how long it took for one of my aunts to get drunk on the wine.  I suggested, since Grandpa no longer would be the one to lead it,  to find another Haggadah that would make the ceremony more meaningful.

“Oh no, she said. This is the ONLY Haggadah!”  Really? This wine stained freebie from Manischevitz? 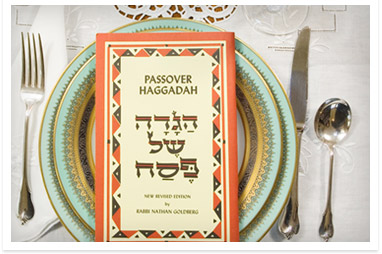 I raised the point again when Dan and Lisa were about 2 and 4 years old. I suggested cutting the Seder to about 20 minutes would be something toddlers could handle. I got the same response.

So, for our first Seder together with Graham, I put together a new Haggadah. I found about 700 versions on the Internet and was able to take some from this and some from that to make something that not only was meaningful to me and our guests that year and in all the years since, but still followed all the guidelines and told the story. We have it down to 4 hours now, including dinner.  Each year we invite 12-20 people to share in the experience and have a great time.

This year our Seder will be two days early. No, I don’t expect any lightning striking me. I am leaving on April 13 to fly to New York and on the 14th, the first day of Passover, I will be on a plane with Lisa, heading to India for her Golden Birthday trip. I am sure the Universe has no issue with this, although some people may.

Buying some ingredients here in the beautiful agricultural lands of Oregon at least an hour from a Jewish congregation is a bit more of a challenge than when I was growing up in New Jersey. I have called a store near the Temple in Salem and will do some shopping when we visit a friend there and eat a meal together this weekend.

One of the most needed foods at this time is matza.  Because of the restriction of eating unleavened bread, it becomes an often used ingredient for many meals.  While our local store has some matza it is not Kosher for Passover. There are more rules on that so the foods have to be prepared specially for the Passover holiday.

But I got to thinking….matza is only flour and water.  I can bake! I read several recipes, learning that the matza must be baked within 18 minutes of mixing the ingredients. This time restriction is based on making sure no leavening takes place.

So, I baked some matzah and it was edible!!!

Not square or round like the commercial brands. The fork holes are not evenly spaced, but I bet it will be the best matzah ever in this house and in this town!