Years ago my mom took the family to Alaska to celebrate the high school graduation of my oldest two kids. One of the amazing foods we experienced there was some home-canned salmon. It was so much better than anything we could purchase commercially in the grocery store so I simply stopped buying it.

A couple of weeks ago I received an email that one of my favorite seafood restaurants, Local Ocean in Newport, Oregon, was offering tuna at an amazing price. The tuna are running and the time was perfect to earn how to home can some! Local Ocean is located opposite the commercial fishing boats in Newport’s harbor and although it has a restaurant, the store is well known as a fantastic fish market.

I asked my friend Charles Price of The Taste Of Oregon and he deferred to another friend Tina Schneider. Tina is a caterer and owner of Incredible Edibles and also brings a portable wood burning brick pizza oven to the Salem farm market.

My sister Laura was the courier, picking up the fish and bringing it to us when she also so graciously arrived to help with the unpacking. She could not be with us for the activity, but for her service, she will get some of the finished product!

I purchased a pressure cooker for canning, 2 packs of half pint jars, and the needed ingredients: tuna, lemon juice, salt, and Charles brought the olive oil.

Tina started us out cutting the fish fillets into small chunks, roughly 1-2 inches square. We put a very small amount of lemon juice and salt into each jar, put in chunks of the tuna and then filled with the oil. Jars were closed up and the pressure cooker loaded and then the cooking started.

We had some rain but Graham and I put up a canopy and a table outside and set up the burners out on the deck. We had been advised to do the work outside because of the anticipated aroma, but one other person had suggested that if the fish was fresh there would be no bad smell. As it turned out, the fuel canisters on the outside cookers did not get the pressure cookers to the temperature/pressure needed so we ended up on the kitchen stove. (the house does not smell.) 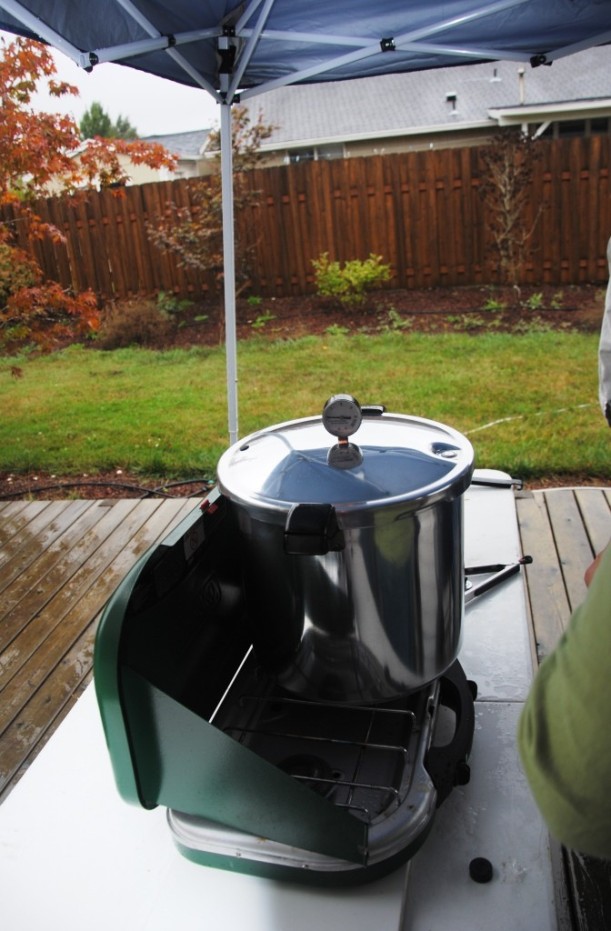 Each batch takes 100 minutes at 10 pounds of pressure, and then time to release. We ended up processing 48 jars and still had tuna left over, so I froze it in the chunks and we will have tuna kabobs in the future.

This was my first pressure cooking canning experience and was a lot of fun! Thank you Tina for your patience and smiles….and the vanilla ice cream you made for the apple pie (from my back yard apples!!)