Years ago my maternal grandfather would preside over the Passover Seder. For hours and hours and hours he would intone the readings and prayers in Hebrew while my cousin Nancy and I would compare the levels in our glasses of diluted wine and water. It was all but a meaningless process and once Grandpa died and my father started to preside, I asked my mom if we could perhaps use another Haggadah. 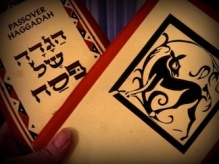 “Oh no!” she replied with shock that I would suggest such blasphemy. “This is the ONLY one.”

(unsaid) Really, Mom? This wine-stained freebie from the liquor store where we buy the Manischewitz?

I tried again when Dan and Lisa were really young. “Mom,” I pleaded, ” Can I revise the Haggadah to reduce it to 20 minutes so the kids really understand and participate?”

“Oh no!”, she replied. (Repeat with me) “This is the ONLY one!” More wine stained than ever.

So, when Graham and I got married and we decided to host a Seder I told him a bit more emphatically than I needed to that I would be finding one that worked better for us. He didn’t care, of course. There are literally over 1000 versions of the Haggadah, each very much following the prescribed order, as Seder means “order”, and telling the story of the Exodus from Egypt.

That’s the first story. The second is next:

The story we share at the Seder is not simply what Cecile B. DeMille’s movie with Charlton Heston shows. We talk about what went on in the minds and hearts of the people affected there and then. And then we try to make it into something we can relate to.

I don’t know about you, but I can not relate to working my entire life building the pyramids or other structures.  I’ve done some physical work and I work pretty hard at the food processing business, even when my body hurts, but to FEEL like a slave takes a stretch of imagination. Growing up here in the United States in the 50s, 60s and 70s, my freedoms expanded and my opportunities were ahead, ready for the taking.

And yet, each of us are enslaved to something that we know we would be healthier without. Me, it is easily sugar. Someone else maybe their tobacco. Someone else their wine or beer or pot or whatever. We can identify people in public life enslaved to the concept of power and how that has warped their view of what is healthy.

Once we can recognize that item for ourselves we can begin to think about how it feels to get rid of it. And not by our own choice. That freedom from slavery in Egypt was not desired by many. Afterall, there is some peace found in a routine that is not desired but has no responsibility. To become free means to take on a huge change. And we know most people do not like change.

In the Seders I host I try to get the people attending to recognize their own enslavement and how they (and I) fight the change that provides freedom.

So that’s the second story. And now, to the concept I hope you will consider.

In the news today one of the issues is the brouhaha about transsexual individuals using the public restroom for the sex they feel is their identity. There is so much fear about perverts attacking children.  There is so much condemnation for the wrongness of these people. There is not the loving (supposedly Christian) acceptance that they have a difference we might not understand but can respect.

We also have grave concern, all of us, about ISIS and other terrorist groups and how they seem to be difficult to stop.  It is horrible how a few people continue to flow to those groups from western society here and in the UK. Why? But the more difficult concept for me is the hatred of ALL Muslims based on these extreme groups. The people I hear who are so afraid seem not to recognize that all fundamental ends of all religions have their extreme and narrow definition of what is acceptable and believe all others who profess to practice the same religion but in different ways are NOT that religion. And need to be changed. It is true in Islam. It is true in Judaism. It is true in Christianity. Meanwhile, it seems hate of the others is easier than acceptance of the other.

I wrote a blog a few months ago in answer to a friend about whether I would welcome a Syrian refugee family into my home. You can read it here.  That issue, as well as a myriad of others supporting people who have had incredibly horrible events occur simply because they were both where and how they were are not hard for me.

I merely remember that I was once a slave in Egypt and was delivered out of bondage. It is my modern role to help others who desire to, escape their slavery. 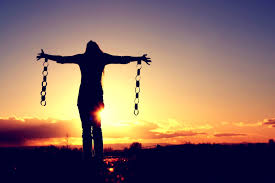