I grew up and voted for the first time in New Jersey. My parents had taken me into the voting booth with them every year while I was young. It was the kind with a curtain. You would move the handle, the curtain would close (did anyone else besides me think of the Wizard of Oz?) and the levers would be there for the pushing. It was possible to push down a party lever and all the votes would be moved, but my parents said it was important to always check out each candidate, no matter the party, and vote for the best person to represent you.  They voted line by line. All levers moved, the handle would be moved back and the votes counted as the curtain opened. 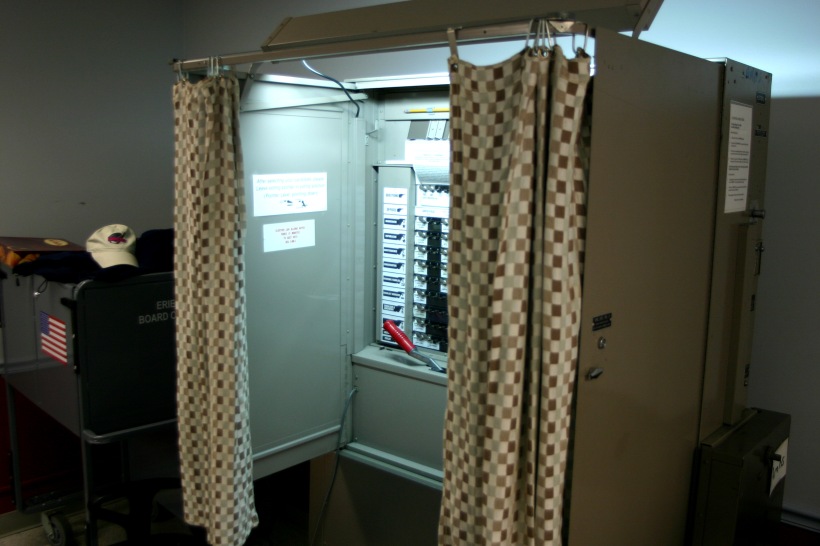 I moved to Tennessee and then on to Connecticut and then back to Tennessee and then to West Virginia before moving to Oregon.  I voted on similar machines and then, as computerization was implemented, a variety of electronic machines.  When we moved to Oregon we didn’t have enough friends to explain the fine points of the vote by mail system. We ended up not getting our ballots mailed on time.  Since then I try to help newbies. 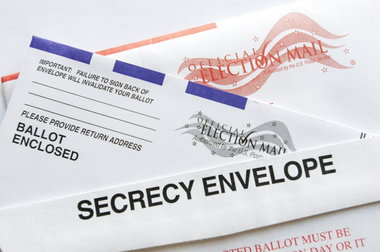 The vote by mail system is really very easy for people to use. There is no issue about taking time off from work or waiting on lines at the polls. We get our ballots about 3 weeks before election day and can mail them in up to 5 days before. At any time during those 3 weeks, we can drop the ballot into a ballot box, similar to a mail box but painted white and sporting a lot of signs that say BALLOTS ONLY!!!!  At least one ballor box is located in each town and many more in cities. (Here in McMinnville we have three. ) The box is open until 8pm on election day when a team (at least one each from the major parties-volunteers needed) pick up all deposited ballots and lock the box slots. 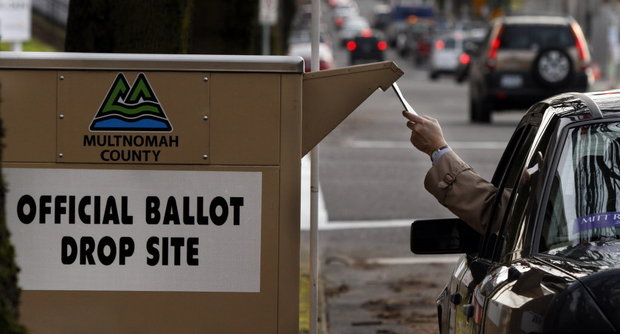 (The people whose  signatures were missing or that didn’t match receive a letter asking them to come into their county clerk’s office for further verification. Sometimes the person is elderly or ill and the signature is a bit spidery or illegible in comparison to the original. Typically, people respond and go verify if the election is close or they want to make sure their vote, if different than the election results, is counted.)

Once an envelope is confirmed to be from a legitimate voter it moves to a different work station where all envelopes are opened but contents are kept intact. The next station is where contents and envelope are separated. The contents are still folded and most often in the privacy slip provided.  This station works as a team, 100 ballots at a time. One worker is a registered Democrat, the other a Republican. A lot of repetitive work…envelope to one side, folded ballot to the other. Then a count is made to confirm they have the 100 they started with, and then move to another work station.

This station is where the ballots are unfolded and visually scanned by another Republican-Democratic team to verify any write-ins or markings that cover any area of the ballot.  Again a count is made to confirm, 100 in to that station, 100 out to the next.

Folded once more, the ballots are sorted by precinct….that number is printed on the ballot that was originally mailed to the voter.  The precinct information is obtained to provide basic voter turnout data.

From there, boxes of 100 ballots are then sent to the next area where the next check is to see if there is only one selection marked for each race. If a ballot marks two candidates in the same race that required selection of one, the ballot is set aside for voter confirmation.

Only then, at the next step, are the actual votes tabulated.

There is no way to match any given ballot at the last step to any specific voter.  Privacy is ensured.

This vote-by-mail system is, as you read, pretty labor intensive. A computerized machine can give results almost instantaneously.  So yes, it takes longer. So there has to be a benefit, right?

Actually several, but there are two main ones:

With the system in place in Oregon, there is no concern for manipulation of computerized hardware or software. With most areas having pairs of workers, each with a different party affiliation, with all the counting before and after to verify no ballot was moved away, there is a security in knowing how you vote is how it is counted.

The largest benefit is voter participation. Election after election Oregon has one of the highest voting percentages in the nation.  This time, it was interesting to note that we had a higher turnout than ever. Last year we the people approved a referendum to start motor-voter. That means that for any DMV transaction the person will be registered if not already on the rolls. (Lots of verification for citizenship and other aspects that restrict voting done before a new person is considered legal to vote.) So Oregon’s turnout for this election was 2 million voters.

But the percentage of participating voters was down a bit.  It was 78.9 %.  However, nationally it was 56.9%, significantly lower.

Why do people chose not to exercise their right to vote?  They could be unable to actually get to the pools, either because of transportation issues or a work schedule that won’t permit it. They could be sick, unable to go to the polls.  All these people forgot they could vote with an absentee ballot. Others, could think it is not important. They could believe that their one individual vote won’t make a difference. They could be so disgusted at the whole thing..the selection process…the advertising…..the rudeness….that they just step back. And more.

At least here in Oregon it is easier for us people. And the protections leave me confident that the results are an accurate portrayal of each participants vote. 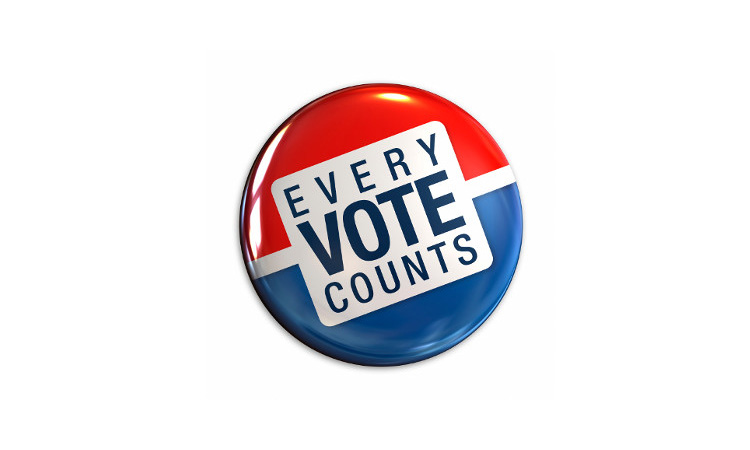 Information is from experience. Not only am I a voter but I am also a volunteer. For the past three elections, Graham and I have been ballot box closets. This past Tuesday we also observed the process for a couple of hours.  Anyone can sign up to do that.

One thought on “Each One Counts”